Tips for cutting down the shopping bill

As a lot of you will already know, I am addicted to Netmums. It's a shameful thing really - I check it more often than I do my emails and if I manage to get more than three 'likes' on a comment, I strut about for the rest of the day thinking that I'm the Queen of Everything.


The threads I love most are the budgeting ones. I could spend hours exchanging tips on how to save money around the house and in taking on board what other posters have said, I've managed to cut our household's annual spend by around £400 in the insurance department alone!


But believe it or not, that isn't where the big savings lie. By careful meal planning and clever shopping, you can end up with a tiny shopping bill and I'd like to share some of the tips I've found which helped me cut back.


Prepare for a lengthy post (but come on - it's Monday... you all want to procrastinate anyways!

When I started meal planning, I made a 'menu'. This was to prevent the inevitable answer of 'sausages' when I asked Husband what he'd like to eat for the following week. Using two columns - one for savoury and one for sweet - I wrote down all the dinners I make that I could think of. I picked out three I wanted, asked Husband to do the same, and made the final choice according to the ingredients we'd have left over. Then I went about making a shopping list.

To begin with, I checked the freezer and the cupboard, then swapped all of my earlier meal choices for ones which would include ingredients we had already. Then I listed all the things I needed to buy and sat down at the computer.

I checked Approved Food first, to see if they had anything I needed, then rearranged the meals so that those awaiting things from the order would be for the end of the week to allow for delivery. Concord Extra was my next stop to see if they had any cleaning products or toiletries which I could save money on. These sites are a brilliant first port of call and it's worth checking frequently to see whether they've acquired any new stock. I managed to get two torches and a toy truck from Approved Food for the grand total of £4 the other week, which means that's three Christmas gifts sorted for £1.33 each! Can't grumble there!

Next, I checked how far away the local supermarket is using google maps to calculate how much fuel it would cost to get there. If a delivery works out as less, then go for that instead of driving... Much easier too and you can shop with a glass of wine in hand. Woo! 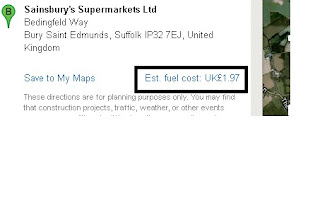 When shopping, it's well worth considering the value/basics ranges. Tesco's Value tea at less than 30p for 80 bags is bargainous and if you're having a bad week money-wise, will certainly not leave you feeling cheated. It's not as strong as other teas, but if you're not the builder's brew sort then where's the harm in saving a few quid? The class 2 veg available at some supermarkets is also fantastic value. If you're not bothered by tiny strawberries and monstrous cucumbers then this is a great way to save money - better yet, try the local market.

When you're shopping, check the kilo price of food too - remember that one can of sweetcorn costs around the same as a massive bag of frozen. And buying in bulk is not always the cheapest way to go - sometimes, the larger packs are more expensive than the medium ones per kilogram. You don't have to do any complicated maths to figure this out either - most supermarkets print the kilo price just under the cost per unit.

If you have a bread machine, there are further savings to be had. Mine was free  -check freecycle, freegle and gumtree before purchasing as these site often have them advertised. It also has a timer so I can set it to make pizza dough while I'm out. All I need  to do is throw the ingredients at it, then press a button - you can do a pizza with basics flour, homemade tomato sauce, veg and cheese for around 50p, so far cheaper than even the cheapest frozen one, and much tastier too. Why not check the menu for places like Pizza Express for inspiration?

You can also do fancy bread loaves by using half spelt and half basics flour - not only are they delicious but they cost less than £1 to make and you can have one fresh every morning if you want. The bread machine I have will also do fruit compotes and cakes, so again, you just throw your ingredients in and press a button, then come back to delicious homemade food for a fraction of the price of bought stuff. To make the compotes cost effective, either grow your own fruit, go hedgerow foraging or pick up things at the market/in the reduced section.

If you can get reduced juice, or even just basics/value orange juice from concentrate you can make some pretty good ice lollies. Just pour the juice into a mould and freeze. Done. Or alternatively, you can make something which tastes exactly like a Feast by blending 2 tablespoons of Nutella with some soya milk. Mmmm....

Here are some of the recipes mentioned above to help get started.

300g bread flour (I just use basics white and it turns out ok)
1 tbsp olive oil (I use whatever oil is closest and to no ill effect)
1 tsp salt
1 tsp yeast
170 ml water.

Throw it all in and let the bread maker do its thang. Spoon into sterilised jars (this mixture only made enough for 2) and then add a table spoon of cherry schnapps (or other fitting liquor) over the top of each one prior to sealing them (if you're of a boozy disposition).

Play around with this though - the only 'essential' ingredients are a cup of apple, sugar and lemon juice (this creates the pectin which sets the jam) then 2 cups of the fruit of your choice.

My favourite bread recipe:
1.25 cups water
3 tbsp chai latte powder (or skimmed milk powder and cinnamon - I just had some powder to use up so invented this)
3 tbsp rapeseed oil (or whatever cooking oil you have lying around)
2 tbsp brown sugar (or any other sugar really - treacle works too for a lovely caramel taste)
1.5 tsp salt
0.75 tsp cinnamon
1 cup seeded flour/rye/spelt (posh flour anyways)
2 cups white flour
just shy of 1 cup raisins

Use a basic white setting, 1.5lb loaf and add the fruit after the dough has been 'knocked back' (mine has a beeper for this but dunno about other machines).