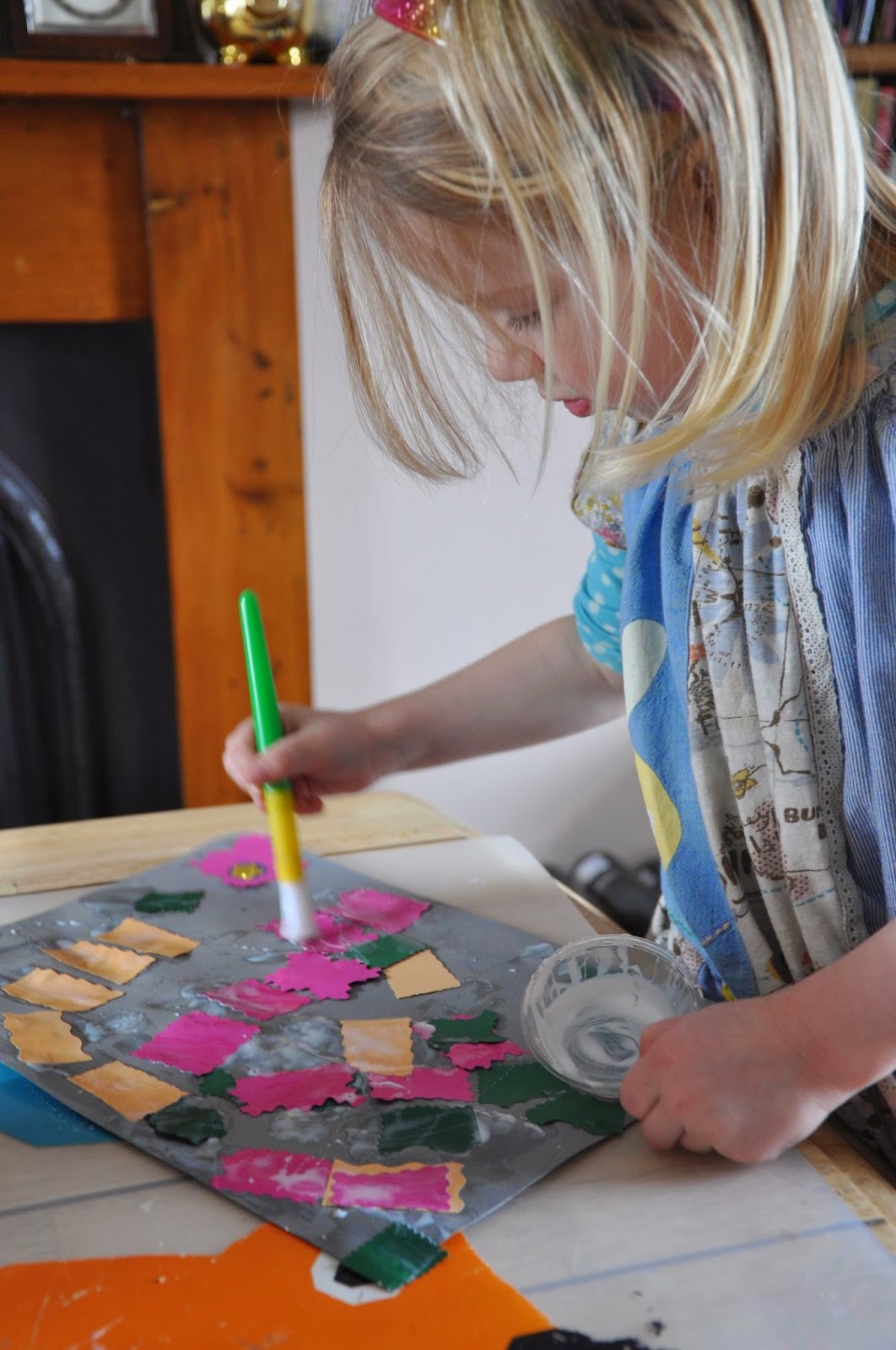 A while ago, my Mum picked up a carousel of scissors from a charity shop. They cut in all different lines - there's traditional pinking shears, some that do waves, some which do crazy Victorian-style wibbly bits (technical terminology, there). They're only strong enough to cut paper, though, which means that I haven't really known what to do with them until now.

A while ago, Daughter and I started getting into board games, but these are expensive and since I find them a little repetitive after a few playthroughs (at least the ones which are age-appropriate for Daughter) we haven't really played any for a while. Since having had Son, however, we've had to find activities that are a little more stationary than our usual countryside stompathons. Board games are ideal for this, though because the rules are fairly rigid, I've often worried about them not being 'creative' enough (I worry about a lot of pointless rubbish, to be fair).

In any case, there came a day when I just hadn't had enough sleep. I mean, one expects to be tired with a newborn but this was something else. I needed Daughter occupied so that I could dose myself with more caffeine than the human blood-stream should be able to handle. Obviously, on that day, Daughter was having none of it. I tried all of our usual distractions but nothing would work. In  a rather strained voice I asked her what she wanted to do. 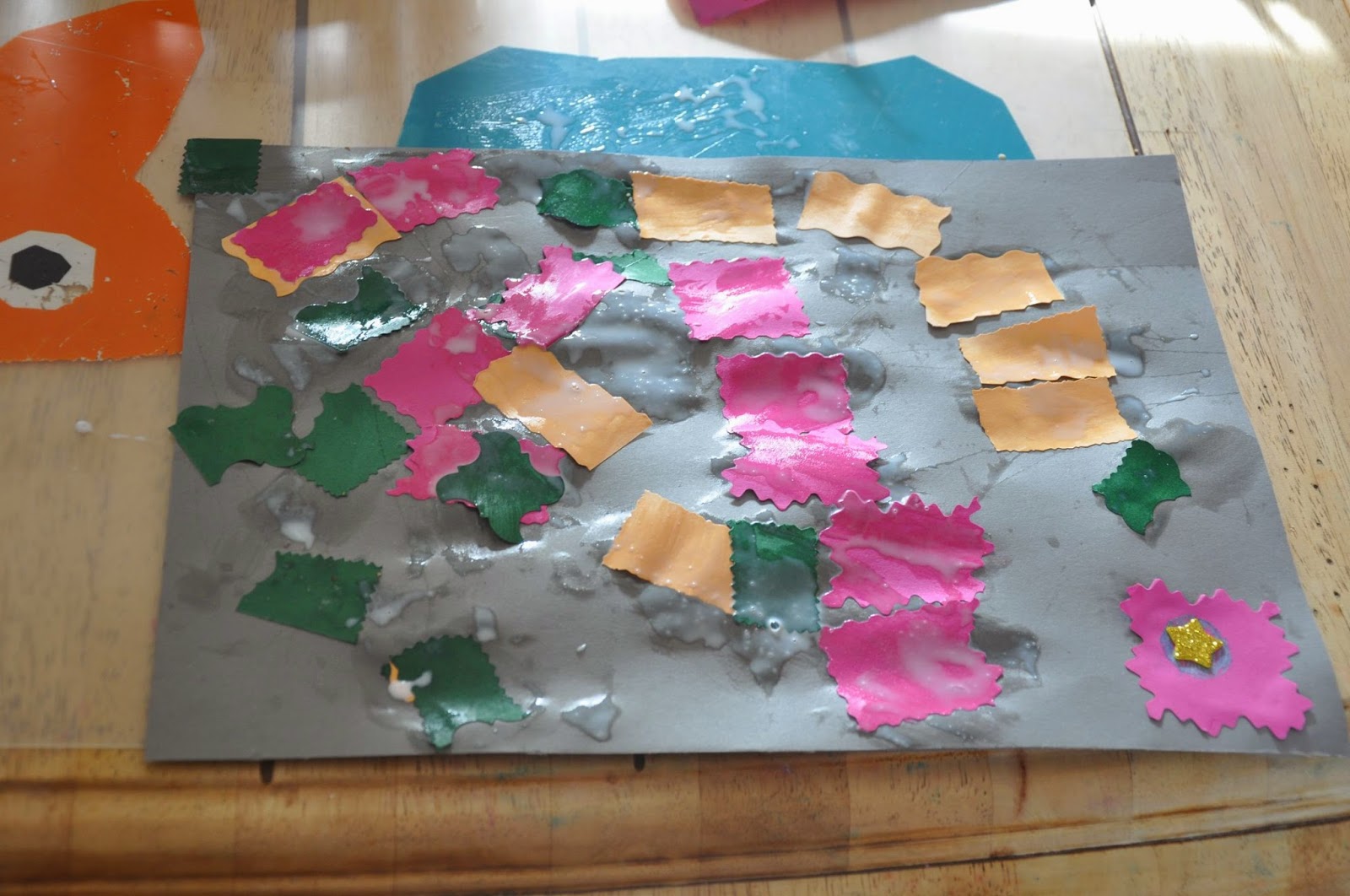 "Use those," she said, pointing at the scissor-carousel. It had sat on the bookcase for the past year and I'd forgotten we even had it.

"Fine," I muttered, fetching it down and handing her some construction paper. She cut happily for hours and though I enjoyed the quiet, my inner-hippie was going mad at the waste of resources. When Daughter was finally fed up, I thrust some more paper at her, along with a tub of glue, and asked her to stick her funny shapes onto the large sheet of card. At least, I thought, making a collage might keep her occupied just a little longer. And then it hit me... through my caffeine induced haze, I realised that we could make something akin to snakes and ladders out of her artwork. I'd long been hankering after the classic - if a little passée -game but as no sets had yet come up at our local charity shops, I'd pushed the idea aside and moved onto other things.

After the glue had dried, I attacked the thing with a Sharpie, and told Daughter to grab her stickers. We ended up having a great time, making up stories about the setting. It's outerspace, you see, and the players are both in crashing spaceships. When a player lands on a square with an asteroid, they move back two spaces (because... well, you would, wouldn't you). When you land on an alien, they help you to fix your spaceship and you move two spaces forwards, bringing you closer to the end... which is a glittery star where the Pirate Princess lives. Obviously.

This is a brilliant activity for school/nursery holidays as you can drag it out to take a whole day. And once you've finished making the game, you can play it. Also, the fact that it's essentially disposable means that you can make as many different games as you like and recycle when they're no longer interesting. This one worked well for us at the moment because we could phrase the moves like sums, i.e. "You're on square 15 and need to move back two spaces. What is 15-2?"

We're off to visit the inlaws soon so I'm thinking of buying an A3 pad and just taking lots of pre-cut squares with PritStik to entertain Daughter on the trip over.

In any case, you'll no doubt see a homemade board game on here again in the not too distant future.