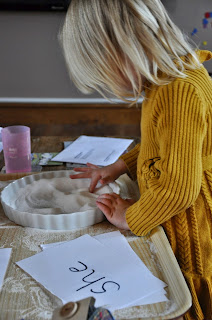 I've said it before and I'll say it again - I'm not a teacher. I have absolutely zero educator's training and this whole world of trying to impart knowledge on small people is one I know next-to-nothing of. At the moment, I feel like I'm stumbling in the dark a bit, trying to follow Daughter's lead.

And she's heading full-pelt towards reading. I mean, I thought I had at least another year until I had to sit and listen to stilted attempts at, "See him run. Run, Ben, run," but we're there now and as ever, I'm left fumbling through Pinterest and Google at night, trying to find some way of turning this all into a game.*

Since we started playing Teach Your Monster to Read, Daughter has come on leaps and bounds. She completed section one of the game very easily and moved onto section two. We're now about half way through it and she's beginning to struggle - particularly with the 'Tricky' words. I had no idea that these were 'a thing' and spent last night googling them.

Mainstream education refers to them as 'Sight Words' - words which don't make phonetic sense and which the reader must learn to recognise on sight alone. The examples we've come across in the game so far are:

Whilst the phonetically regular words she encounters are absolutely no problem, these words are causing furrowed brows and tantrums. Pinterest to the rescue then... 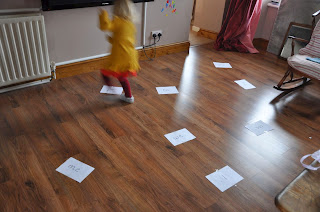 Except we have a very, very limited budget. I mean, it stretches to paper, pens and occasionally kitchen ingredients. And sticks, of course. We have a lot of sticks.

In any case, this is what I came up with - I drew the words out on A5 paper and asked daughter to run, hop, crawl or scoot-on-her-bum between them. This really helped her start to recognise the words and totally unbidden, she began giving me examples of sentences which used the word she was standing on. Epic.

To try and make doubly sure she'd got it, and it wasn't just her remembering where the words were on the floor, we shuffled up the cards and poured some salt into a quiche dish (I will use this salt later on in salt dough - no wastage here!) then had her trace the shapes with her fingers. I liked how tactile this was for her and she seemed to really enjoy doing it (see the pic at the top of the page). Of course, copying the words only lasted about ten minutes, but drawing faces in the salt kept those tiny hands amused for a good while longer.

*To be fair, the rate at which she's hoovering information suggests that she would happily listen and parrot anything I have to say, but I don't want her in a 'school-room' yet. I want her running around outdoors, wrecking her clothes in muddy puddles and drawing on the walls. Life's got enough sitting at desks in it already.
Posted by Cry Mamma at 07:02