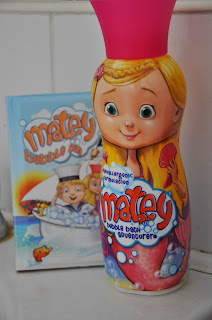 There are few things which remind me of my Nan's house as much as a bottle of Matey. Which possibly sounds a little bit odd, considering I only remember a single bottle of the stuff. I strongly suspect that when the first lot ran out, my canny Yorkshire-woman of a grandmother filled the bottle with Chapletown market's budget alternative and I was quietly disappointed that the bubbles weren't as good for a long while afterwards.

But I digress. The lovely people at Matey were kind enough to send Daughter and I a bottle of their nostalgic suds, along with a special edition bath book - something we were both very keen to try.

To begin with, bath times were a real struggle for us. Until Daughter turned 9 months they were nothing but a screaming match, and even until the 18 month mark, they were something which filled me with dread - suddenly going in was fine but coming out again warranted howls that even our soft, sappy cat couldn't sleep through. For us, a bath book - something I never even considered the existence of - would have acted as a wonderful bridging tool - first to make the actual act of bathing much more familiar (because as you've probably all guessed by now, 99% of our day seems to be spent in books) and then to bribe the girl away from splashing and into story time.

As I said, bath time began as a struggle and so I brace myself for it, even now, whenever I start running the bath. So it came as a bit of a surprise when a recent study - carried out by FlyResearch on behalf of Matey - revealed that bath time was number 4 on the list of top ten child bonding experiences (right behind Having a cuddle, playing together and reading together). I have to say though, having the familiar ground of a story to fall back onto really made the experience far more enjoyable. The little poem by Emma Greaves is ideal for this, particularly the actions involving bubbles - bubbly beards, bubbles on your toes etc.

However, the research showed that one in four parents (25 per cent) don’t make it home in time from work for their child’s bath. Over half of mothers (57 per cent) stated it is their responsibility to wash their child.

The research showed that only one in ten (9 per cent) of dads get to bathe their children on average once a week, with a fifth (20 per cent) revealing they take over bathtime duties at the weekend. Almost half of fathers (42 per cent) said they feel sad if they do not make bathtime more regularly as they miss out on a key bonding experience.

The top ten parent – child bonding experiences as chosen by parents were:

However, the research revealed that for nearly a quarter of parents (23 per cent) bathtime can also be one of the most stressful moments of their day. 27 per cent of mums admitted to being so tired by the end of the day they can’t fully enjoy the
experience. Bathtime itself was revealed to be a source of worry with over a third (38  per cent) of parents concerned about the water temperature, 28 per cent about their child swallowing water or bubbles and 17 per cent about their child’s skin being too sensitive.

To help parents across the country and to make bathtime a fun and enjoyable experience for children, bubble bath brand Matey has produced a limited edition waterproof bathtime book. The book was written by mum of two; Emma Greaves aged 37 from . Emma beat off competition from hundreds of other mums to become a published author.

Emma submitted her entry about the adventures of the Matey characters – Max Matey, Molly Matey and Peg Leg as a poem, impressing the judging panel. The book is now being published with a limited edition run of books being sent to mums across the country.

Emma Greaves, author of the Matey Bathtime Book said, “It’s a dream come true to say I am a published author thanks to Matey. Bathtime was such an important bonding time for me and my children. When the kids were toddlers I always made up games to make bathtime fun – they both loved to make Mohican hairstyles and foamy beards out of the bubbles which they thought was hilarious. I’m very proud to have written the Matey bathtime book – it helps to create an adventure around bathtime and hopefully giving parents a story to tell will be a great way to get children around the country to look forward to and enjoy their bathtime.”

Nick Wilcher, Marketing Manager at Matey said, “Our research showed just how important bathtime is and how many mums and dads treasure the time they get to spend with their little ones each day at bathtime. For over 50 years Matey has been famous for making bathtime fun and now with the introduction of our Matey Bathtime Book we can help families across the enjoy a happy and memorable bathtime and savour those precious moments with their children.”
Posted by Cry Mamma at 15:46