So, after raving about Toucan Boxes last time I posted, ours turned up late this month. But as an apology, there was an age-appropriate card game included - Farmyard Trumps.

Being nothing more than unassuming cards in a tidy little tin, this game is brilliant for long journeys, waiting in restaurants, and Christmas stockings. In addition to the suggested game, you can also play snap - amazing for practising quick number recognition - and number flash cards (if you're so inclined - I never actually figured out how to use flash cards though so someone else might have to field that one...)

We played the game as described on the box, but it became clear after a few turns that though Daughter can count really well, and recognise what the various digits mean, she has little concept of which number is larger than the other. And that's where that old box of marbles finally comes into its own. Of course, if your family doesn't have a giant tin of marbles, anything you can use as counters will do - buttons, shells, pebbles, coins... anything you can get your mits on. 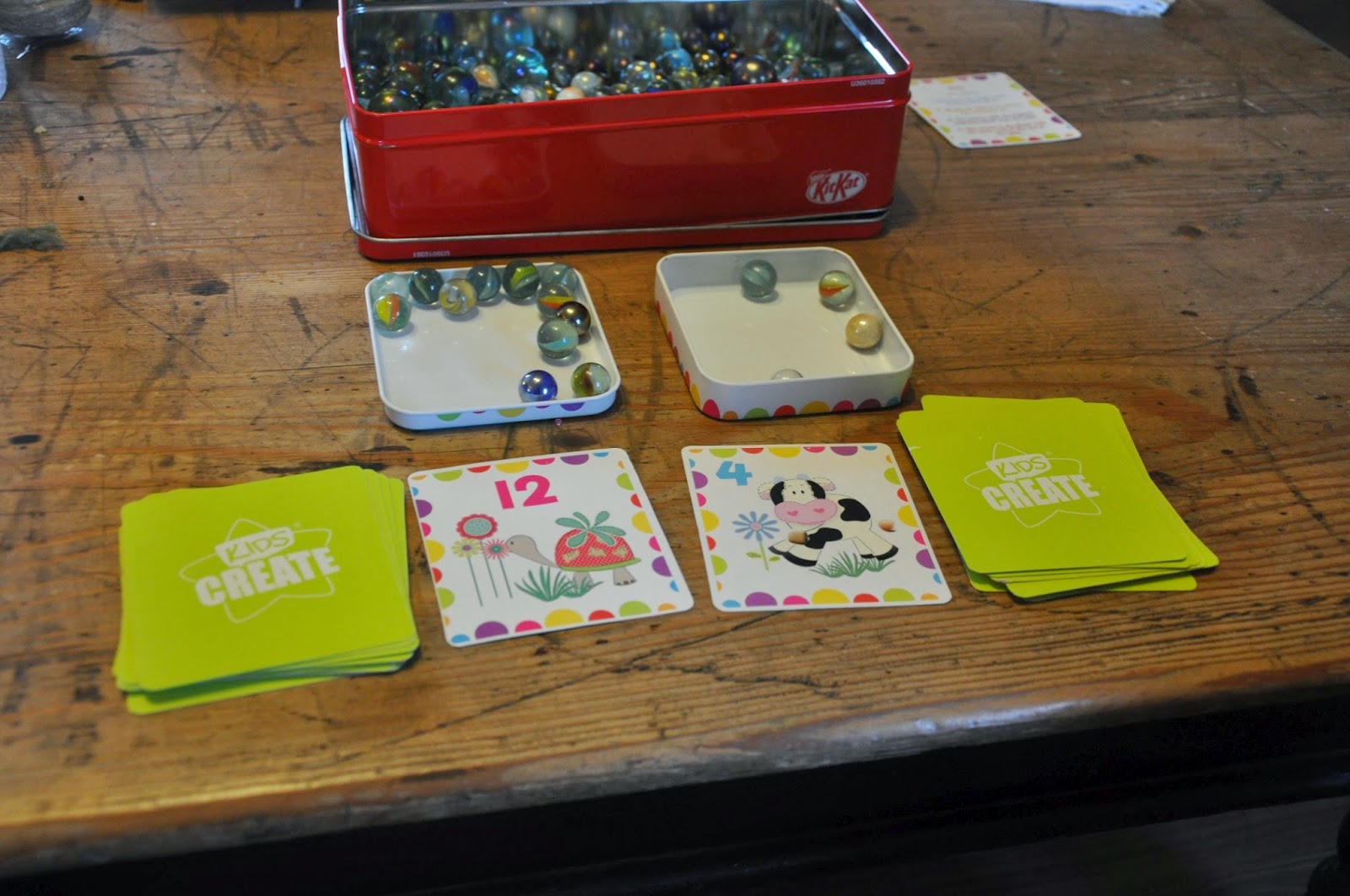 Because marbles are tricky blighters, we used the tin from the game to count ours into, but obviously you won't need these if you're using coins or buttons or things which won't roll.

Having a visual reference really helped Daughter to understand the concept of less/more and she picked up the whole thing very quickly. Before we counted the marbles into their tins, I got her to guess which would have more in and after a short while, she was guessing correctly every time. I then went on to try and explain that a number made of two digits would always be more than a number made of one digit. That also really helped her to get a good grasp of things quickly.

It struck me though, as we were playing, that she was a little unsure of the numbers above 10. A quick recap of her number books showed that very few went as far as the teens, which struck me as slightly odd. Numbers from 20+ follow a really easy pattern, but prior to that, there's little about their linguistic names to help with reading. Eleven and twelve are especially odd, whilst the rest are pronounced from right to left - six-teen, not ten-six as with every other number in English. Why not just teach them all in with the first ten - linguistically odd - numbers? 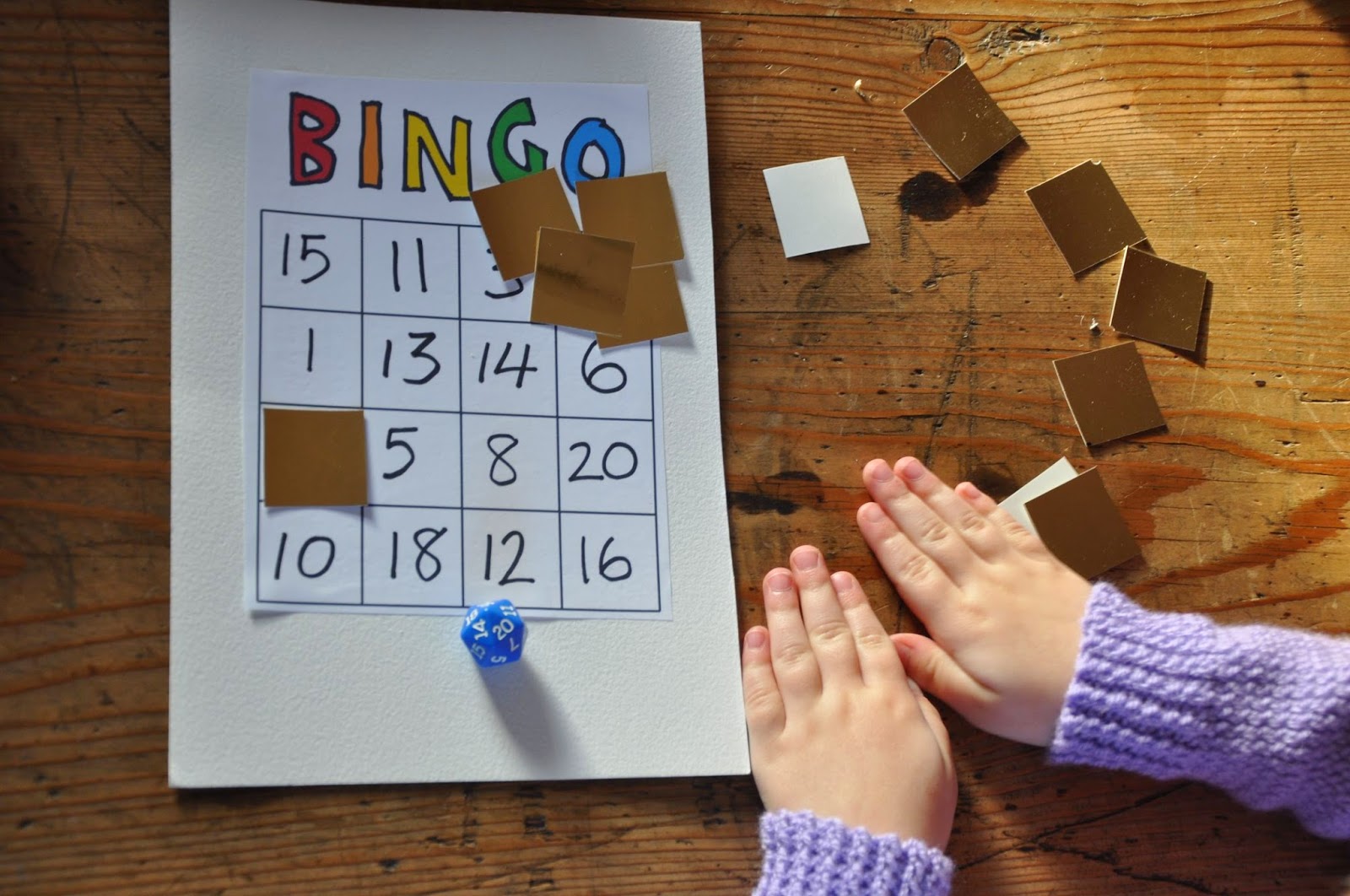 I have to admit, without books as a starting point I was massively slightly out of my comfort zone. But that old classroom favourite came to the rescue - Bingo!

A quick googling pointed me to PreSchoolMom.com  (which is totally worth checking out if you have a printer and a bored toddler!) and these blank Bingo sheets. A quick decapitation of Christmas gift tags made some super shiny bingo markers and I dug out my trusty D20 from many moons ago (I was a level 17 elf, I'll have you know).

This is fairly self explanatory - fill out the bingo sheet (you could make these with letters if you wanted to work on literacy, and have your child pull fridge-magnets out of a bag... actually, you might be seeing that one next week...), roll the D20, get the child to read the number aloud and then have them match it on the bingo card. 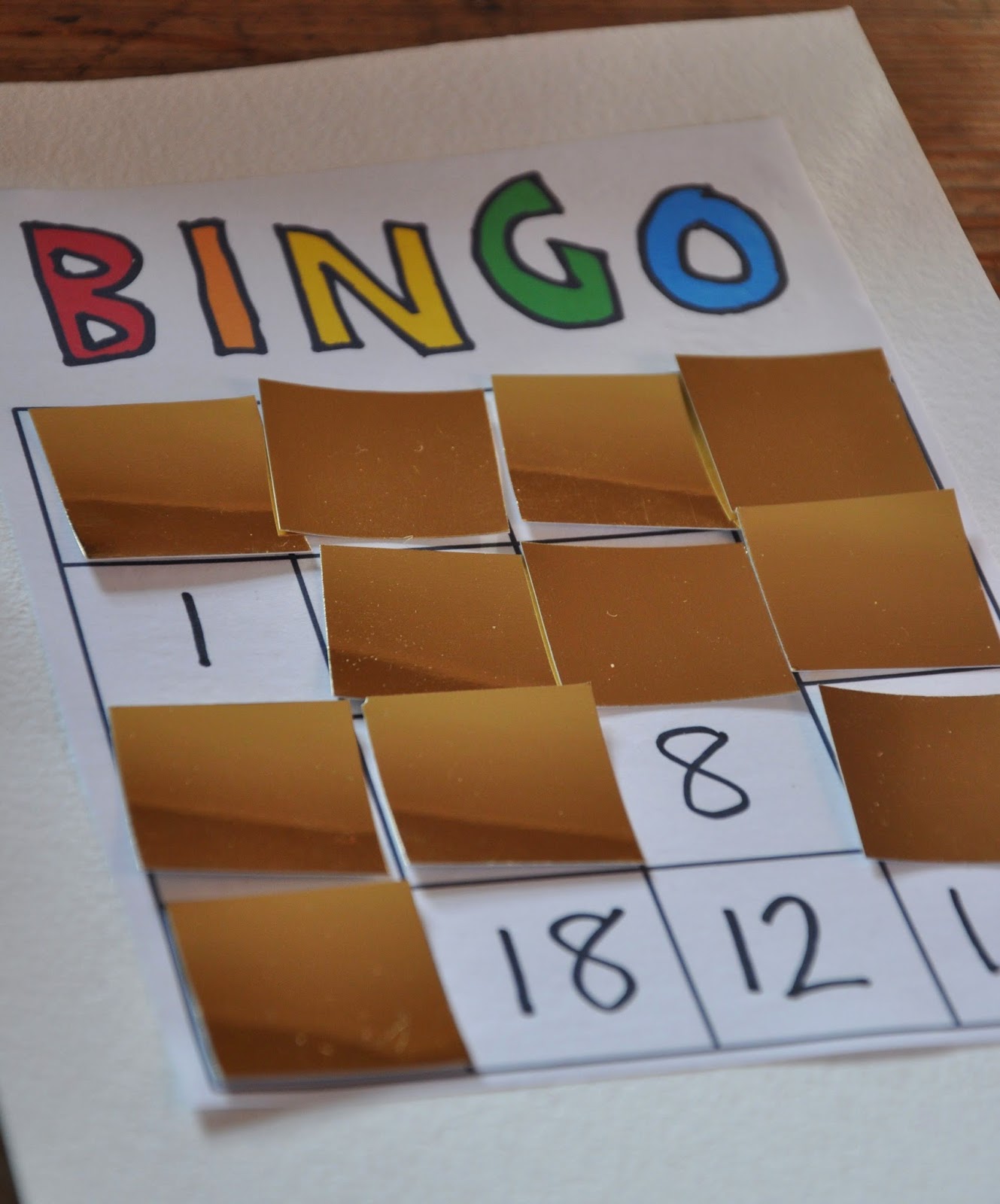 Daughter took to it really well, and especially liked rolling the funny shaped dice down a kitchen roll tube (long story). The shiny paper also appealed to her magpie instincts, and she had no issues matching up what she saw on the D20 to the writing on the sheet. It didn't take long at all for her to begin recognising the teen numbers and during the second play through, I was able to leave her to it for five minutes while I went to make a cuppa.

If you're a sticker person, and don't mind printing multiple sheets (we don't have a printer so I have to bum papers like this off Mum, hence the reusable aspect of our game) then you could get 1-20 stickers and add in a third 'matching' element. Or give stickers as prizes for lines of bingo.

We'll see how we do after a few more days with 1-20 and then start seeing if we can work in the abacus which has been sat upstairs looking pretty for a long, long time.