When I'm on my own with Daughter - i.e. when Husband is working - I try to get out as much as possible. It's sometimes hard coming up with new activities and so I tend to fall back on that old favourite of mine - going out for cake.

It's probably not  a good lesson to be teaching - that food is a way to relieve boredom- but I do think it's important that children get used to eating out from an early age so that they know how they're expected to behave in restaurants. It's mainly for this reason that I don't agree with things like MacDonalds, incidentally. Sure, the food isn't something I'd want to consume, but it's mostly the informal eating that bothers me. I like the idea of being sat at a table, waiting politely for the food to arrive and then eating it in company - it's the social aspect I really want to encourage. Whilst I do make every effort to sit at the table at home, a lot of the time, it's just Daughter and I, limiting the interaction she sees.

In any case, looking to combine my love of cake and the need to occupy Daughter, I stumbled on the Hatter Street Studio in Bury St Edmunds.* They don't currently have a website that I can find, but do show up on google maps.

The Studio itself is reasonably small, but this gives it an intimate atmosphere and I think in terms of practicality, anything larger with children and breakables wouldn't be the best of ideas. As it stands, there isn't enough space to run around and so that negates it from being an issue. Don't get me wrong, it isn't cramped or anything - and the bright walls showcasing some of the pots available for painting really makes the space seem open and airy.

I haven't tried any of the mains there, but  the carrot cake is exceptional and the range of teas is good. It's a pleasant place to go, even if you're not planning on getting arty.

We did though.The prices of the pots were reasonable, though because it's quite an addictive thing when you get going, I wanted them to be much cheaper so that I could paint all the things.I found that once I'd done a little bit of the teapot with Daughter, I had all kinds of ideas as to how we could make matching mugs, and milk jugs and such... I could have spent a lottery win in there, I really could.

The finish on the fired pot is really outstanding, and if I hadn't been competing with little chubby fingers covered in paint, I'd have been able to create something which wouldn't have looked out of place in a fancy department store.

Daughter had a fantastic time and the place was really geared up to accommodate slightly older children. The only thing I really felt was lacking for her though, was a high chair  - if I'd thought ahead I could have brought her travel one with me, so not so much of a real issue. 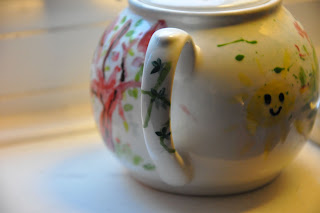 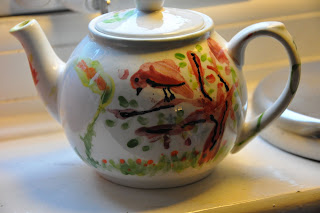 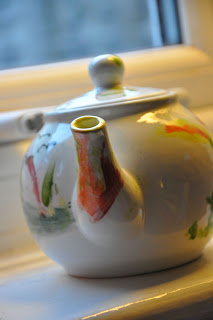 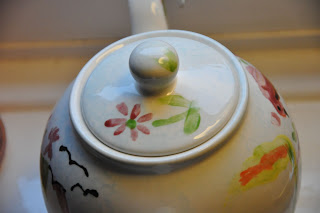 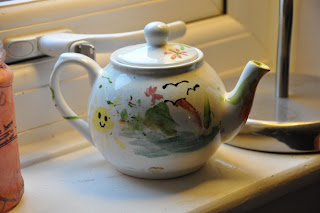