We're lucky enough to be staying at my Inlaws' summer house just now. Situated on the west coast of Denmark, we're in a wonderfully windswept and romantic spot - all sand dunes and wild weather. 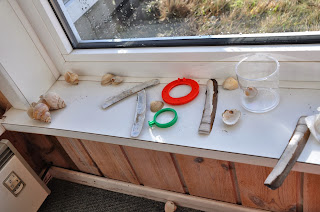 Needless to say we've been making the most of our time here by heading down to the beach between bursts of horizontal rain. Sure, it's cold and wet, but sand in the summer time just doesn't do it for me. I much prefer seeing the ripples on the beach left by the wind, whilst the quiet of the sea out of season really speaks to the part of me that cried like a baby when Newsround ended my dreams of being a lighthouse keeper before they'd even really begun. Apparently, living on the edge of the world by yourself doesn't appeal to most people as a job and it was necessary to mechanise the whole thing. Boo.

Anyways, my crushed hopes aside, we found a lot of shells, and shells are apparently brilliant for entertaining small people. Daughter set herself up at the windowsill with a big pile of razor clams and conches, then set to examining her treasure in the light. 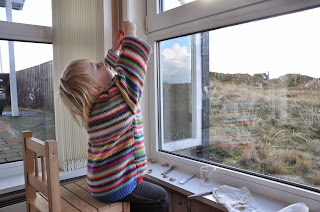 We were also lucky enough to be given a magnifying tub by family of ours in Germany - ideal for exploring the marks left by barnacles on shells.

But this is stage two of our operation - the really exciting bit for me was watching Daughter fill and empty the shells, using the puddles outside the house. She discovered - all by herself - which shells held the most liquid, that some were better at floating than others, that rocks sank quickly to the bottom, and that bigger rocks made bigger splashes. I mean, this is physics. This is proper physics, all just using puddles and things with found on the floor.

Naturtally, my terrible endurance meant that as soon as the wind and the rain started turning my ears to ice, we retreated indoors... I really wish I was capable of creating my own body heat... 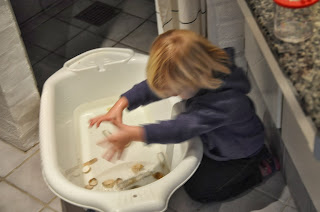 But the fun continued inside. We dug out Daughter's old baby bath and tossed everything in it - conkers, rocks, shells... you name it. I brought her a spoon so she could measure how much water each shell held using a quantifiable amount. Before half an hour was up she able to tell me - without using direct comparisons - that shell A held less than shell C because shell C was smaller than shell B and shell B was smaller than shell A. Absolutely AMAZING. She could also tell me that the conker was light, so it would float, and the rock was heavy so it would sink. And best of all, it was free and initiated by Daugher. Science for the Win!