This book's taken a while for me to write about because it kind of breaks my heart that there's a need for such a story.

Addressing body image, Neil Irani's book follows a girl who sees a goblin when she looks in the mirror. She hides herself away, avoiding parties and other social activities - even going as far as to wear an enormous hat to school to hide her face.

When her hat blows away and she follows it into the forest, she meets a young boy there who treats her kindly, and she begins to see herself as she really is.

Aside from the obvious - the heart-breaking poor body image suffered by the young girl - the story addresses the importance of friendship and kindness. I think it helps children to see that their attentive, empathetic actions can really make a difference to how others feel. 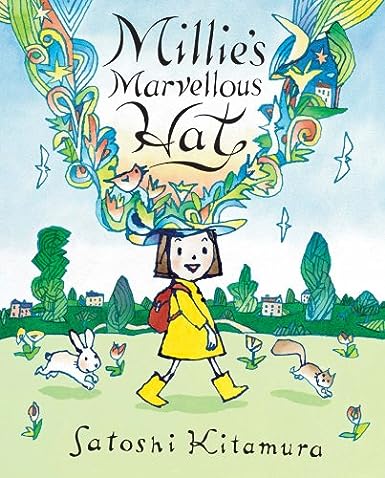 To follow up that line of thinking, I chose to pair this book with Millie's Marvelous Hat, by Satoshi Kitamura. The passage which particularly helped to illustrate this was when Millie had some of her hat's creature's fly over to the hat of an old lady by smiling - hats being the physical manifest of peoples emotions in these amazing illustrations. The happiness felt by Millie was suddenly shared by the old woman through a simple interaction - something that all of us would do well to remember.

Also, the beautiful, colourful illustrations helped to blast away some of the sadness which lingered with me after the Goblin and the Girl. Don't get me wrong - I found it a touching and overwhelmingly optimistic read, but that such young children needed to be reassured about the way they look already left something of a bitter taste. This is a very poignant book which speaks volumes of our times.
Posted by Cry Mamma at 12:26