So yesterday, my friend and I took Daughter to Moyes Hall museum in Bury St Edmunds. I found it really informative and there was a lot there aimed at children. The Small One had a great time trying on medieval and Victorian costumes, doing jigsaws and - the big hit of the day - having a go at brass rubbings. 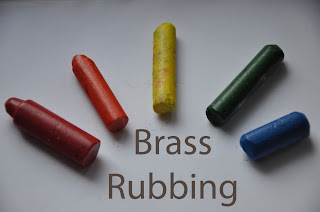 This is one of those simple things I'd never thought of doing with her before, even though it's cheap, easy and fun. We took some tins I have - from board games, biscuits etc. - and used the raised writing as our rubbing surface. You could also use trees, leafs... any rough and hard surface, really. All you need are some crayons and some paper. 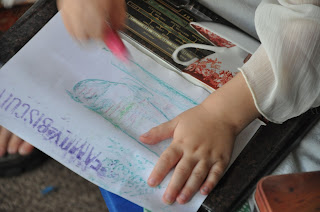 We used this as a way to talk about the letters on the rubbing and on the box - were they the same, which letters could Daughter see, how many letters were there? Again, you could really discuss anything here. I was really impressed when the Small One's little finger pointed to the outline  of a shape and said, "tree trunk", so we added some  branches, some leaves and the grass beneath it. She was very proud of having drawn something instantly recognisable.

This is something we'll absolutely be doing again. And I have some plans for things to make with the paper - waste-not want-not after all...
Posted by Cry Mamma at 06:08